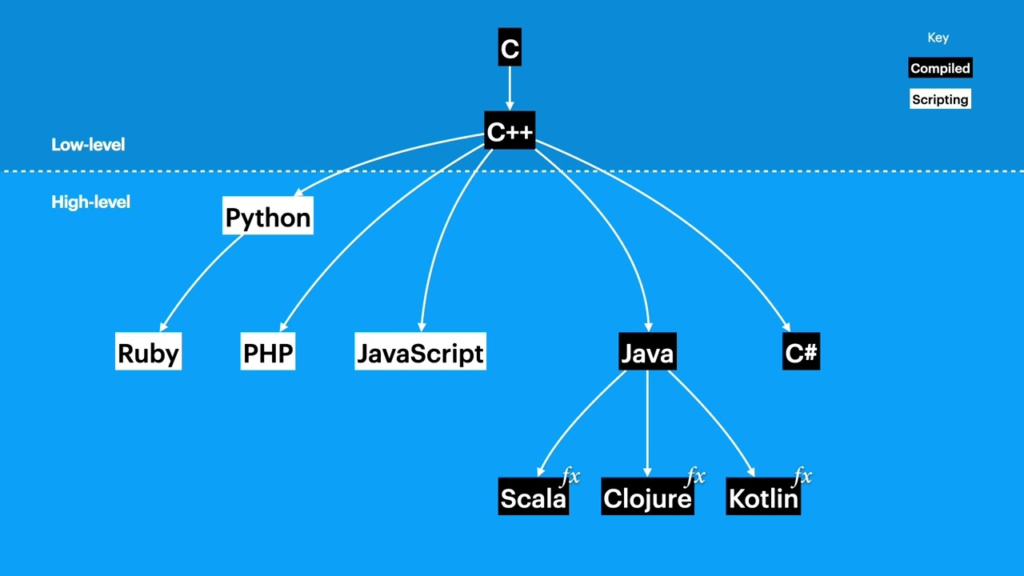 Did you know that the C programming language is almost 50 years old? And, despite all the competitors, trials & tribulations, and naysayers, C is still ruling the roost! The Tiobe Index of 2022 (the most popular, reputed & revered programming language ranking of them all) ranks C at the second position, right after Python and above its evolutions, Java & C++ assignment help. This prominence and dominance are not just because C is the foundation of almost every modern programming language but also because of its timeless features.

Today, C and her sons, C++, C#, Java, JavaScript, PHP, Perl, and Python (the reference implementation of Python is CPython), rule the software programming world. So, why is the C family of programming languages so potent and popular? What is its history, and how did it dominate the history of coding?

The Immense Abilities of C and The C Family

C, the progenitor of the C family of languages, was the creation of Dennis Ritchie, a computer scientist from the infamous Bell Labs. Dr. Ritchie and his colleague Dr. Ken Thompson developed the language as a successor to the B programming language.

A multi-paradigm language, C uses both the imperative/procedural & structured programming approaches to conduct operations and is the most potent and capable middle-level programming language, thanks to its lightweight nature, portability, minimal overhead, and excellent overhead adaptability. And that is the reason why C is the foundation of so many different programming languages that have themselves become forces to be reckoned with.

C and C++ have maintained their usefulness & popularity for decades, and there are still dedicated C & C programming assignment help services & online courses available for both students & professionals. And, we needn’t say anything about the immense popularity and potency of C#, Python, Java, etc.; you must be well aware of their ubiquitous applications already.

So, how did this highly influential family of languages rise?

ALGOL may be considered the root of ALL programming languages, the original primogenitor. Next came BCPL, the Basic Combined Programming Language, by Martin Richards. BCPL employed the procedural/imperative and structured paradigms and later became the foundation of the B.

B, a non-numeric, type-less, and machine-independent language, was the language on which C was built. C is the primary language used to develop the Unix/Linux system, and its potency & versatility made it increasingly prominent in systems, applications, and network programming. Being the foundation of robust & simplistic operating systems such as Unix/Linux led to widespread adoptions of C as well as established the formal standard of the language for further development.

After its development, C evolved through the years. Unsigned, long, union, and enumeration types were added to C’s type structure. Structures in scholarship essay samples gradually evolved into objects we use in object-oriented programming today.

The earliest evolutions of C happened between 1973 and 1980 when C-based Unix OS was gaining fast prominence across academic & research-oriented endeavors. The 1973-1980 period is generally referred to as the Kernighan-Ritchie period of C (after Dennis Ritchie, the founder & Richard Kernighan, his partner in crime). The infamous book, The C Programming Language, was initially published during this period. Lots of features were added to C that made it what it is today, such as:

1983 witnessed the American National Standard Institute form a committee to develop a standard for the language. By 1989, the first standardized version of C, known as ANSI C (ANSI X3.159-1989), came out. The 1989 version of C was effectively superseded by the standard of the language released by the International Standards Organisation, ISO C, or the C90.

Further modifications of C took place through the years with releases such as C95, C99, and C11 in 2011. C11 in 2011 was a significant release that added a host of features such as:

C11 is the most popular version of ISO C used across different applicational domains. C17 superseded C11 as of 2018 and is currently the most recent standard of the C programming language.

The C family is vast, and it will take an entire book to discuss every member. So this article focuses on two of the most prominent, immediate members of the C family- C++ and C#.

A Brief History of C++

C++, formerly called C with Classes, offers the best features of C and adds some stellar features of its own. Developed by Danish Scientist Bjarne Stroustrup at the Nokia Bell Labs, C++ is a superset language of C with provisions of object-oriented programming, inheritance, function arguments, classes, etc.

Turbo C++’s powerful compilers and extensive libraries were a massive reason behind C++’s rising popularity. No wonder, despite being discontinued, Turbo C++ is still used widely for academic purposes.

C++ combines the speed & portability of C with the power of object-oriented programming. And that’s one of the biggest reasons behind the continual popularity of the language.

We round up this writeup with a look at another infamous member of the C-family, C# or C-Sharp.

A Look At The Rise of C#

2002 was the year when C# first came out. Within a short span of time, it became a potent language with widespread applications. Microsoft Corporation is the creator of C#, designed it as a contemporary of Java. C# was released with MS Visual Studio 2002, and earlier versions derive heavily from Java.

The C family of languages dominates the IT and software programming domain and will continue for years. Simplicity, portability, potency, flexibility, vast, powerful libraries, and tremendous community support make them the ideal choice for developers all over.

C and C++ are ideal starting languages if you aspire to be a coder. So read more, code often, enroll in online courses, and if need be, look for professional C++ assignment help and C programming assignment help.